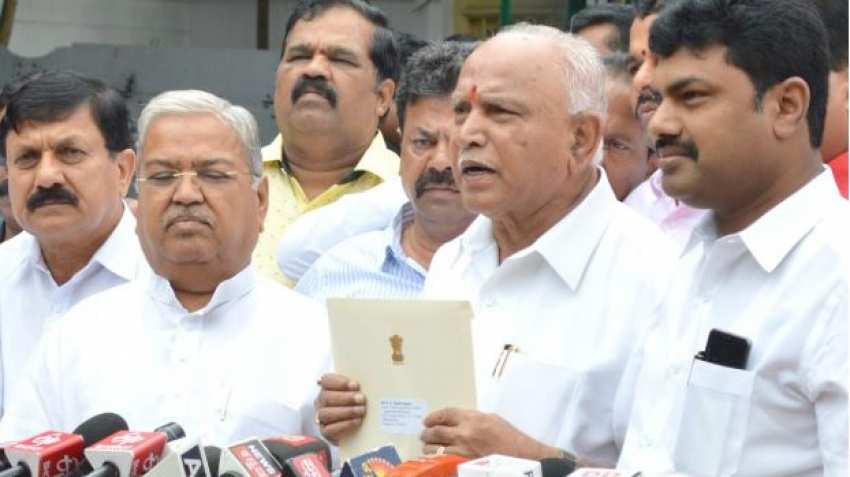 BS Yeddyurappa took oath as new CM of Karnataka: BJP state President BS Yeddyurappa moved toward the Governor on Friday, 26 July, to stake guarantee to shape the administration in Karnataka, three days after the alliance government lost the trust vote.

He is good to go to make vow at 6PM today. BS Yeddyurappa took oath ,CM HD Kumaraswamy presented his abdication to Governor Vajubhai Vala after the Congress-JD(S)- drove government lost the trust vote in the Vidhana Soudha on Tuesday. The alliance got only 99 cast a ballot against the BJP’s 105 in the floor test, losing the trust vote by 6 cast a ballot.

In the mean time, Karnataka Speaker KR Ramesh precluded MLAs R Shankar, Ramesh Jarkiholi and Mahesh Kumtahalli on Thursday, explaining that they can’t challenge race once more. Ramesh said that he will settle on different grumblings “in two or three days.”

BJP president BS Yeddyurappa met Governor Vala on Friday and staked guarantee to shape the following govt. He will make vow at 6 pm. Yeddyurappa to Prove Majority by 31 July

Yeddyurappa met Governor Vala before today to stake guarantee to shape the following government in Karnataka.

Siddaramaiah tweeted on Friday, “Notwithstanding not having a larger part, BS Yeddyurappa’s rushed choice to stake guarantee and become CM has been acknowledged by the Governor. This is a hazardous advancement for parliamentary majority rule government and the Constitution. This demonstrates BJP’s absence of certainty.”

Tending to the press minutes after his gathering with the Governor, Yeddyurappa said that he would make vow at 6 pm. He welcomed previous CMs HD Kumaraswamy and Siddaramaiah to his vow taking service.

“Quite recently, I met the Governor to frame the legislature and make vow as CM of Karnataka. He has concurred and composed a letter. Around 6-6:15 pm, I will make vow. I demand all our Congress, JD(S) and BJP MLAs to take an interest, particularly previous CM Kumaraswamy and CLP pioneer Siddaramaiah. I will likewise be composing individual letters to them,” he said.